In accordance with the provisions of the Articles of Association, the Board of Directors (BD) is a decision-making body which establishes the organization structure, development directions, business plan, and supervises the activity of the Bank, performing the supervisory function, namely carrying out all monitoring and control attributions for fulfilling the Bank’s strategy and objectives within the approved tolerance limits.

The bank is managed in a unified system, the Bank’s leadership and management being entrusted to a Board of Directors (BD) as managing body with supervisory duties, while the executive management of the Bank’s activity is delegated to the Managing Committee (MC). The Board of Directors (BD) performs its activity in accordance with the applicable legal framework and of the Articles of Incorporation, and the Managing Committee (MC) ensures the executive management.

Members of Idea::Bank Board of Directors: 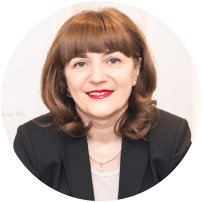 Gabriela Nistor is one of the most experienced leaders of the banking system, with a career of almost 30 years in this area. Starting with October 2022, she is the Executive President of Idea::Bank, part of the Banca Transilvania Group. Within BT she coordinated the retail, private banking and network activity and in 2013 she became Deputy General Manager.
In her 27 years of career at Banca Transilvania, she implemented many innovative projects at that time, she started up the card business in BT, set the call center activity and led the digitalization of retail in BT. The most recent example in the digital area is  BT Pay digital wallet.

She grew professionally at the same time with the bank and she contributed to everything that BT means today - the leader in the retail, card and online payments market.

Gabriela Nistor is involved in the development of the financial and banking market, being also President of the Executive Committee of Visa Romanian Member Forum (since 2008) and Vice-President of the Romanian Association of Banks (since 2021).

She has an EMBA degree from the University of Sheffield and in 2021 she became a finalist in Study UK Alumni Awards for Europe in the Professional Achievements category. 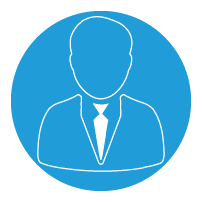 Sinan KIRCALI has an comprehensive international experience in top management positions in the field of banking finance. He has been successfully operating in the international business environment for over 29 years, spending the last 14 years in Romania in management positions of several financial institutions. Sinan is a graduate of the Faculty of Public Administration Sciences of Istanbul University, since 2016 he has a PhD in financial-banking sciences, and since 2012 he also has a Master in Business Administration (MBA) in the same field as his PhD. Both degrees were obtained at Okan University Turkey. Sinan has an extensive experience in the financial-accounting field, in merger processes and in post-merger actions and is fluent in Turkish, English and Romanian. 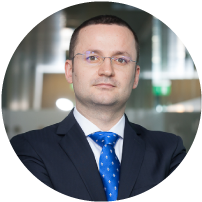 Alin Fodoroiu has an extensive experience in the field of loans and has been active in the banking and finance sector for more than 15 years, prior to the position of Executive Vice President of Business, he held the position of Product and Sales Coordinator Manager at Idea::Bank S.A.
Alin's expertise in business covers loans for both retail and SME and it has been acquired during the development of long-term projects in top 10 banks in Romania. Alin has actively contributed to the development and launching of Idea::Bank in Romania by developing a new products and services portfolio. Alin is a graduate of the Bucharest Academy of Economic Studies, the Faculty of Finance, Insurance, Banks and Stock Exchanges.

Sorin Dumitrescu has an extensive experience in the sector of banking-finance and risk strategies. He has been successfully active in the financial-banking field for over 20 years, and prior to the position of Executive Vice President Risk, within Idea :: Bank, he held the position of General Manager and Executive Vice President Risk within other financial institutions operating in the financial-banking market of Romania. Sorin is a graduate of the Bucharest Academy of Economic Studies, Faculty of Finance, Insurance, Banking and Stock Exchanges and has gained a complex experience in the financial field in prestigious commercial banks where he has built his career step by step. He promotes a managerial style focused on results and efficiency.